Another brazen attempt by a morally bankrupt private parking company to nail Bigot for ignoring his most recent PCN . This was issued on the basis that he failed to park within the designated lines of the bay. 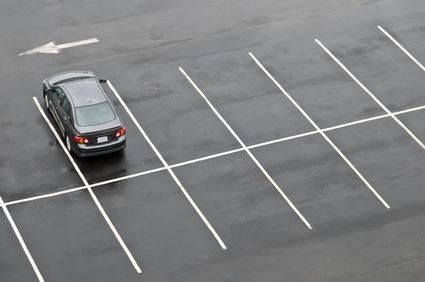 Counsel for the plaintiff (CP) : As you can see your honour from this aerial photograph Bigot's car tyre was touching the white line .....contrary to the terms and conditions he agreed to abide by....... when he entered the contract of his own free choice
B-J : Which were ....?
CP : To park the car  "within " the the lines...........which in simple language means inside
the lines
B-J : And the purpose behind this term ?
CP : Well , this offence amounts to using up two bays......which in simple language means double parking.......a mischief which can cost the company a great deal of money in lost revenue
B-J : Yes......this could be the case if the car park is exceptionally busy with waiting motorists desperately looking out for available spaces.....but your photo clearly demonstrates that the parking lot was empty.......hence no mischief done
CP : But it is still a breach of Excel's conditions
B-J :  And the damage to revenue is what ?
CP : Er.....er.....I can't say exactly
Judge : Well ......it seems to me that your relentless pursuit to shaft Bigot in court is nothing more than indulging in pernicious bullying tactics......and yes there has a breach but only on a petty technicality , which suggests nominal damages of £1.....with all costs of course to be met by the claimant. Case dismissed.
B-J : Don't you think £1 is a bit steep ?
Judge : Yes....on reflection I do.....change that to one penny
B-J : Your honour I am eternally grateful
Judge : And so you should be.....you cheeky little scallywag

Posted by Howard Bigot-Johnson at 02:23

we are in
Britaine.co.uk
united kingdom's guide