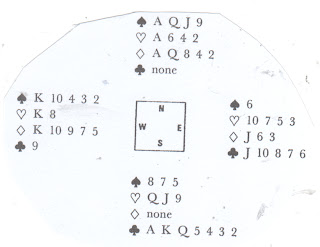 JOHNNY
FEELS
THE FULL
FORCE
OF
BIGOT'S
BLOW
OUT
........
In a rather tense and tetchy league match , Bigot-Johnson thought victory was in his sights , being able at last to stick one on Johnny. However , on the penultimate deal ( see above ) disaster struck when Johnny , sitting South elected to bid 1C only to hear an a 1S overcall from Bigot. North passed , hoping for partner to reopen with an obligaory double , which duly took place . This ended the auction.
With both sides vulnerable, a great deal was at stake. North got off to a cracking start with the Ace of Diamonds , followed the two. This was ruffed by Johnny, who promptly played off the A/K of clubs. Bigot ruffed in only be be over-ruffed by the 9. Another diamond was played , which was quickly trumped by South.
Now Johnny forwarded the queen of hearts , covered by Bigot with the King , who inwardly screamed in agony as the Ace take the trick. Back came a heart to South's Jack.........followed a 3rd round of clubs , ruffed and over-ruffed.  With eight tricks already in the bag and another two certain trump tricks to come,  poor Bigot was facing up to a very embarrassing 1100 penalty.
As the score was entered up, Johnny leaned across towards his red-faced opponent, only to whisper ".....but for the unfortunate lay out of the cards that was a reasonable overcall.....but there again might not a 1D overcall been better "
Bigot then rose up from his seat, grabbed Johnny by the lapels of his white tuxedo, and snapped back ....." I'll give you buts ........" , whereupon he head-butted him in front of several concerned onlookers.
When the devastating news came back that on the other table Bigot's team mates had ended up in 6C , going off one doubled , the pot boiled over completely as Bigot took it upon himself to beat them into a pulp. Taking defeat lightly was never one of his strengths.

Posted by Howard Bigot-Johnson at 04:47

we are in
Britaine.co.uk
united kingdom's guide